Join RinkWatch Go to the map

We used data submitted by RinkWatch participants to identify key temperature thresholds for having a skateable outdoor rink. The colder the air temperatures, the higher the probability a rink is skateable, especially once the average daily temperature dips below -5.5C. We combed through historical daily weather records dating back to 1942 for each of the NHL’s Original Six cities to count the number of high-probability skating days each winter. Why 1942? If you know your hockey history, that was the first season of the six-team NHL: Boston, Chicago, Detroit, Montreal, New York and Toronto. Also, backyard rink making started to gain popularity with the growth of suburban housing following WWII, making the 1940s a logical place to start tracking forward.

What did we find? In all six cities, the number of high-probability skating days per winter is declining, especially in the easternmost cities. We also see growing year-to-year variability in the number of skating days in recent decades – a yo-yo effect, where winters swing from cold to mild with growing frequency. The changes are especially pronounced in Toronto since the 1980s, where today there is on average one‐third fewer high-probability skating days than in previous decades. Montreal is seeing similar changes, but not as pronounced as Toronto. We also see the outdoor skating season trending towards later start dates in Boston, Montreal, New York, and Toronto. Given their milder maritime climates, outdoor rink making in the Boston and New York areas has always been more challenging than in the inland Original Six cities, and the number of rinkless winters looks to be growing. Chicago has seen the least noticeable changes so far, while Detroit looks like it is on the verge of transitioning to shorter average skating seasons.

Our results were published in the scholarly journal “The Canadian Geographer”; if you would like a copy of the full scholarly article, send us an email at rinkwatchproject@gmail.com. Below are a few charts from the study, showing changes in the number of skating days in each city. 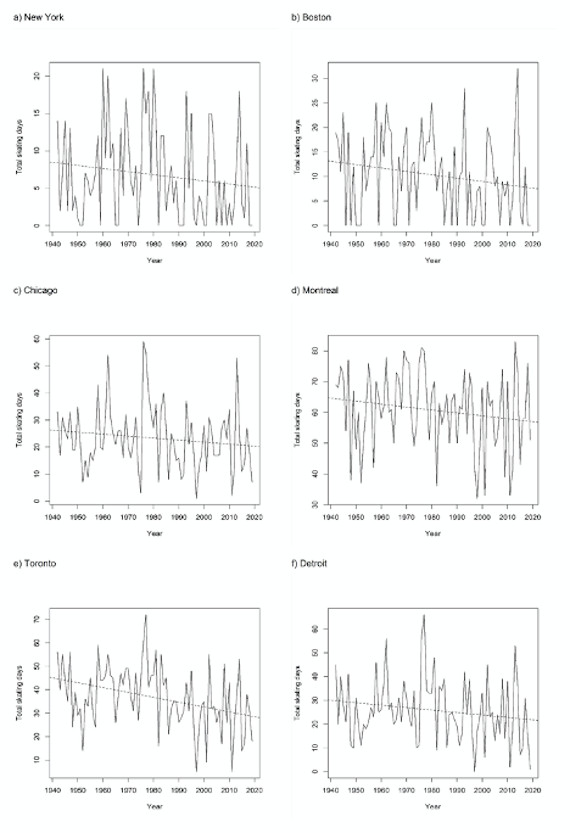 Winters too warm to skate?

Using data submitted by RinkWatchers during our first two winters, researchers at Wilfrid Laurier University estimated the likely impacts of global warming on outdoor skating opportunities in Calgary, Montreal and Toronto in coming decades. They found that rinks are most skateable when average daily temperatures are colder than -10°C, and that their skateability deteriorates rapidly as temperatures approach -5°C (Figure 1). The number of days each year cold enough to skate is expected to decline in coming decades because of human-induced climate change. By combining RinkWatch data with computer simulations of future climate conditions, the researchers were able to estimate the decline in skating opportunities. Note that the changes will not be the same everywhere; the loss in skating days will be greater in Toronto and Montreal than in Calgary, due to regional differences in the rate of warming.

Why do people build backyard rinks?

Dedicated RinkWatchers will recall that back in January, WLU kinesiology student Ashleigh Frederickson asked you to participate in an online survey about your motivations for keeping an outdoor rink. Of the 283 people who were actively using the RinkWatch site at that moment, 48 responded to the survey, which is a good response rate and a large enough sample for the answers to have statistical significance. 40 of the survey participants were Canadian and the remainder from the US. There were no significant differences between the answers given by Americans and Canadians.